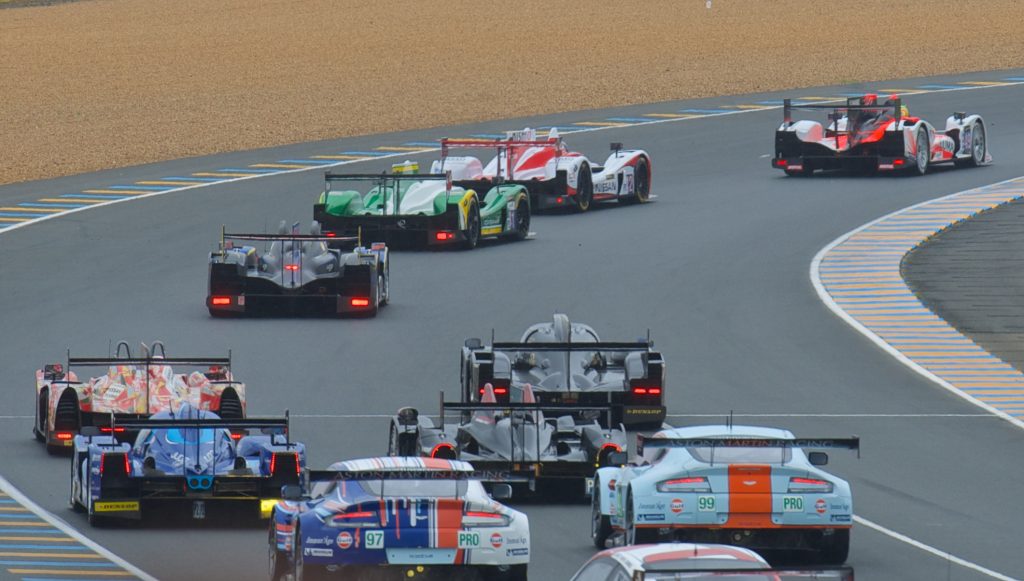 Here is a long-awaited update on the car-pack situation:

We listened to your feedback from 2017; Consensus was that while the Enduracers cars look good, they felt weird to drive and were difficult to set up. Also, we recognize the issue that lapping between GTE and 2015-spec LMP2 is difficult on the track due to the low top-speed differential. Therefore we decided to adjust for this year:

From the beginning, we had the idea to run 4 classes this year. As most of you know, the GT3 DLC from Studio 397 came out last year, so this was pretty locked in the beginning. We were, however, debating how to best combine the remaining classes. Regarding the lapping issue LMP2 vs. GTE – we wanted a 2017/2018-spec LMP2 car to alleviate this issue. We had in fact acquired 3d models and begun developing our own cars when Studio 397 recently announced the upcoming release of the Oreca07.

Long story short! We want to fully support Studio 397 and the incredible progress they have made with rFactor2. Therefore we will be running a full car set of official 1st-party content:

As you are probably aware, all of this content is not released – for this reason, we will get the ball rolling with placeholder-content and replace with the Studio 397 cars along the way.

As a temporary solution, we will run our practice server with the following cars:

Using the URD content, of course, requires purchase. For this reason, the server will be password-protected. We have a list of the ones of you we have already verified to own the URD cars, whom we will send the password once the practice server is online. Others can apply via a form here on our website. Once we hopefully have fully migrated to Studio 397 cars, the server will be open to everybody again.

We know this a precarious situation, as most teams did begin initial practice and driver programs in January. And you were right to do so, after the December updates that we gave you guys on our plans for the coming months. However, from then on we got stuck in a predicament consisting of several factors: Legal models and how to obtain them, Pricing of models, the time frame of creation and finally rumors that Studio 397 were doing the exact same thing. A very potent cocktail of questions, that had to iron themselves out, since most of it was completely out of our hands.

This led not only to thousands of questions and private messages from teams and drivers, all with the same topic: When will the cars be ready.

We had heated debates in the management group, that finally lead to the vote being called on March 6. which gave us a pretty decisive indication on which direction to follow. At that point, we did only know that someone else might be working on the same Oreca 07 model. As you all know, shortly after that Studio 397 announced that they were working on the same model, and they were working on GTE spec cars. This caused us to stop all development, and for two weeks we have been debating forth and back on what decisions to make.

The final verdict is now here, as you can read above. Lay your preferences for different mods aside and I hope everyone can agree, this is the most valid and sane plan possible at the moment.