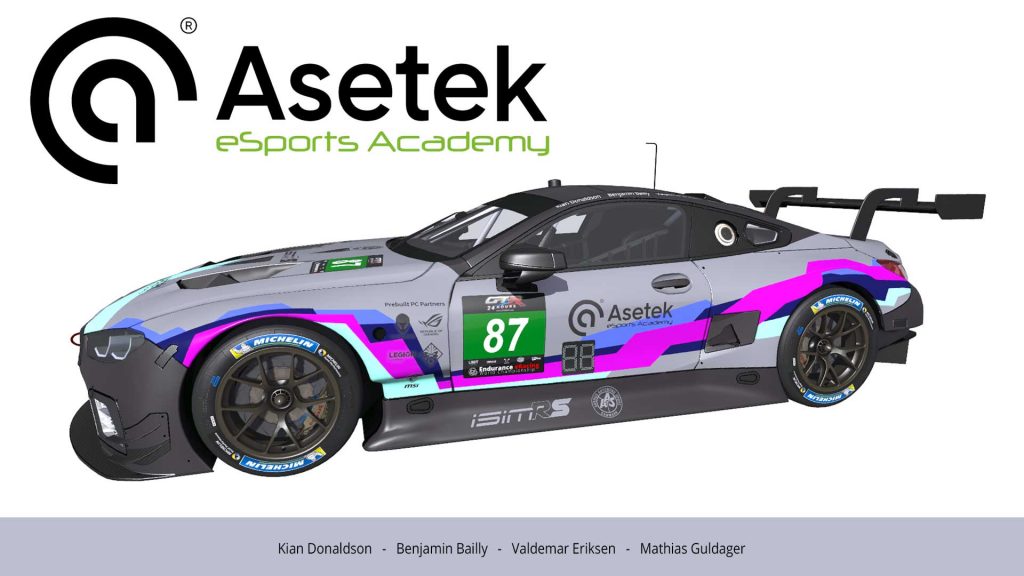 The team returns to the Endurance eRacing World Championship for its second consecutive year of endurance racing. This time though in the GTE class, and with a few other changes. The team hasn’t changed its philosophy, which from the beginning has been, to provide young racers/sim-racers with an opportunity to experience a full scale live sim-racing event, without having to blow the bank. This time around they’ve had to go a little bit “off track” with the philosophy, only to make way for an EEWC comeback.

It has been eight years since Benjamin Bailly last sat foot in what, at that time was a pioneering event in sim-racing.

Clearly the car lineup has grown quite a lot since Benjamin last participated in the event, and none of his teammates will have the last name of Thiim, but they will definitely go equally hard or go home.

Benjamin has driven all kind off racing series and his record speaks for itself. Nowadays Benjamin is running his own driver coaching company “Bailly Driver Development”.

We are so very excited to have Benjamin Bailly back at the event and on the Asetek team.

Also returning for his second Endurance eRacing World Championship Kian Donaldson will be joining the team travelling from the UK to be a part of the 24-hour race.

Since Kian raced last time at the EEWC in 2018, he has been very busy. Not only with school and his drivers’ license, but also managing to secure a seat with BS Motorsport in the BRSCC Mazda MX-5 Championship.

We congratulate Kian on this achievement and hope that this will be the beginning of a long and great racing career.

A new face on the team will be Mathias Guldager. Mathias is a true sim-racer with a fast pace and a strong mindset.

Mathias is no stranger to competitive sim-racing. Just last year he raced with his own team in the Danish Championship on iRacing, and this coming season Mathias and his “Gold Racing Team” will compete in the NEO Endurance 24H series.

At the EEWC in just a few weeks time, he will be representing the Asetek team and the entire team is very pleased to have him on board.

Last but certainly not least Asetek Esport Academy has secured Valdemar Eriksen. Valdemar is currently racing in the French as well as the Danish F4 series.

No stranger to racing Valdemar brings a large amount of experience and tested skills to the Asetek team. When Valdemar is not racing IRL, he is co-managing his own team with sponsors, events etc. and he also has time to do a bit of sim practice.

The team expresses great appreciation in Valdemar taking time away from a busy schedule, and look forward to having him join the team.

Team Asetek Esport Academy is also been fortunate enough to have Bjarne Trier Nyby from “Aarhus Automobil Sport” to be alongside Kenneth Jensen in the pit box, as well as using their simulator set up during the event. We thank “AAS” and hope to be partnering them again in the future.

Apparently the team knows better than many of their competitors and hasn’t set a goal for the result of the event. They seem to have taken a very Doug Fehan approach to the race. Just prepare and practice the best that you can, show up at the race, and try to do the very best you can. Then keep doing that for 24 hours and see where it takes you. We do however see the team as very strong contenders for a podium finish. And so does the bookmakers.

Look for the grey and black Asetek Esport Academy BMW M8 racing with the number 87 in the GTE class.