Ever since the first ever GTR24H Sprint Series race began at Spa nearly 5 months ago, the field has been stacked with top-tier simracing talent. One of the stalwarts of the series have been Simply Race, entering with 3 cars and 6 drivers, one of which was former BTCC driver Mike Epps. However, it was John Munro and Ross McGregor who stole the show at Misano on Wednesday as they took a historic victory that was so rightfully deserved.

Their ability to never give up has been legendary in a season that didn’t start very well for them at all. Munro and McGregor didn’t start their season at Spa with their teammates, where the famous blue and white cars only managed 7th as their best result. Instead, the British pairing came out to play at Brands Hatch where the Bentley excelled, scoring itself a podium finish with Mike Epps and Tobin Leigh at the helm. You’d think this would set the team up for a barn-storming next few weeks, but success on home turf only gave way to bad luck.

Ross McGregor was chasing down Tiziano Brioni for that elusive podium at Zolder, before a fuel miscalculation stole it away at the last moment, and a lacklustre Bentley struggled at the tight, technical Hungaroring track. This was a tortuously difficult phase of the season for them, things never seemed to go their way, and meanwhile, everything that Burst Esport touched turned to gold. However, with championship aspirations well and truly out of the window but still 8 rounds to go, the whole team could really focus on the all-out push for a race win.

Signs of light at the end of the tunnel emerged at Bathurst, with the team finally scoring a strong 3-4 finish to soak up and enjoy. It really began to look like a corner had been turned, particularly for Munro and McGregor who managed P5 at Suzuka, despite using the unfamiliar Mercedes and Daniele Primavera displacing them in the final 3 minutes.

Spirits were dampened slightly at the halfway mark however, the #15 car was going through a streak of 5 races with no points-scoring finishes, and an unsuccessful venture into the BMW at Laguna Seca saw podium placings become an increasingly distant memory for the British team.

In the EEWC, Simply Race weren’t fulfilling their high expectations either, finishing second in the first two rounds of the season to their GTE rivals Musto GD eSports.

Back in the Sprint Series, they were completely absent from the rain and chaos at Kyalami, which I think was bizarrely the real turning point for them. When the rain came in Germany two weeks later, Simply Race tackled it with ambition rather than fear, unlike their competitors, and this positive attitude is exactly what was needed after a turbulent few months.

Big hitters like Brioni and Henningsen made poor strategy calls at the Nurburgring and in their frustration, got caught up in a fair few accidents. Munro drove the perfect race however, and despite not being anywhere near the fastest car on the day, the underdog #23 squad were able to clinch P2, their first podium of the season. They were determined to do well in their home race at Silverstone two weeks later, and while Munro couldn’t work the same magic, Dan Kell and debutant Luka Berk grabbed P3 with both hands.

At the penultimate round on Wednesday, Musto GD eSports confirmed themselves to be faster than the rest in Italy. Yet, they also received the worst luck to strike their team all season long, allowing Ross McGregor to take the lead of the race with 35 minutes to go. Behind them was a charging Leon Otocki, who was striving for his first win of the season alongside Marko Pejic and, having been jumped in the pitstops, needed to get back through.

It was set to be a momentous occasion, and with just under 20 minutes to go, the battle began in earnest. Against his better judgement, Otocki waited a long time for the right moment, and in hindsight probably should’ve put in a few probing moves earlier in the race as he was left with only 3 laps to make the difference. On the final lap, the German really went after the win sending it down an impossible gap into Turn 10, but McGregor defended stoutly in a finish for the ages to take the win. All of the heartbreak earlier in the season suddenly became worth it, and Simply Race finally took their well deserved win in the GTR24H Sprint Series.

Congratulations to the entire Simply Race team, and we look forward to seeing them out on the circuit once again in the near future! 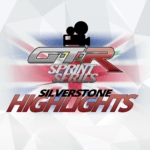 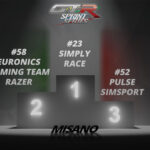