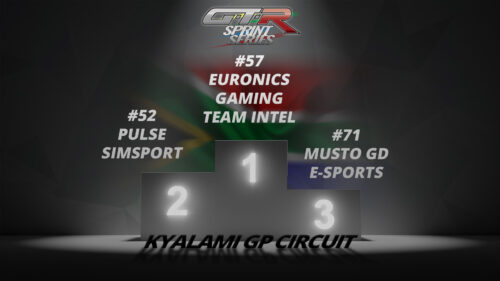 Wet weather brings out the best in the best. With the first rain of the sprint series, any little struggle became exceedingly obvious, and some drivers managed the bad visuals and terrible conditions better than others. To make the game even more interesting, the race contained multiple battles. Turn one was drama as always and the reduced visibility and slippery condition did not improve the situation. Pulse SimSport #52, for example, manages to keep the speed up despite the weather and battels they found themselves in 2nd position early and held on to it for the rest of the race.

Meaning that Pulse SimSport #52 made it to the podium for the first time in the GTR24H Sprint Series. The bad luck for EURONICS Gaming Team Intel #57 seems to have ended, and with a clear head start from pole position, they seemed to be doing their own little race and kept the frontrunner position throughout the race. Team Musto GD e-Sports #71 did not do as well in the rain though. They started on 2nd position and then fell to 10th position. Their entire race was one strong comeback drive though, and they ended up in 3rd position, with the last position being made up in the dying laps of the race. At the end of the first hour, the rain stopped, and the drivers could go back to focusing on gaining positions without also having to deal with bad conditions.

In the final 20 minutes of the race, EURONICS Gaming Team Razor #58, Musto GD Corpse #98 and the #62 got into a nerve-wracking battle, as both Musto GD Corse #98 and EURONICS Gaming Team Razer #58 took over #62 and then went into a close battle for who would get ahead first. The #98 managed to get in front of the #58 car for a short moment, and shortly after car #58 took over the #98 car a few minutes later. Musto GD Corse #58 thereby gained their spot in the top 5.

What a fascinating race