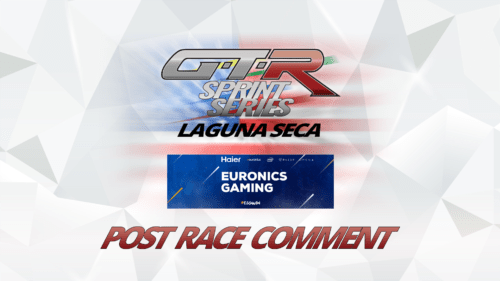 Earlier in the weekend, we received the following from Vincent Jarschel with Euronics Gaming:

“The bad luck is with us the whole season so far. Team Intel had a good race pace before the event so we were optimistic to take the 2nd victory of the season. Tim drove the qualifying session and was completely surprised by the car behavior with low fuel load. He wasn’t comfortable at all so only P2. The race pace was incredible once more so he could challenge the leader. A little contact was penalized with a drive-through. That was again the end of all winning hopes. P2 was one more disappointing result.
Team Razer had a decent qualifying. At the start, someone sent it and opened a three-wide but braked way too late. Our car was in the middle so there was no escape. The crash cost us quite some track position. Marko did a good stint and came back up to P10 even after another crash, not by his fault. After the pit stop, Leon couldn’t shift down so we had to retire the car.
Team Omen got a drive-through at the start for whatever reason. After 50 minutes a crash caused a repair stop which cost us lots of time. We tried to come back but we were too low on fuel. Fuel-saving took the chance of some points away from us. P12 at the end. We hope to come back stronger. We didn’t lose the hope of having one race without any issues with any of the cars.”