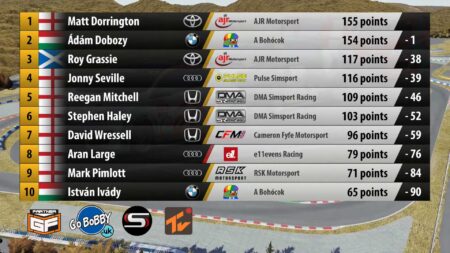 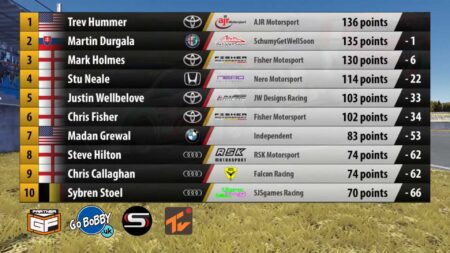 AM Standings coming into Okayama 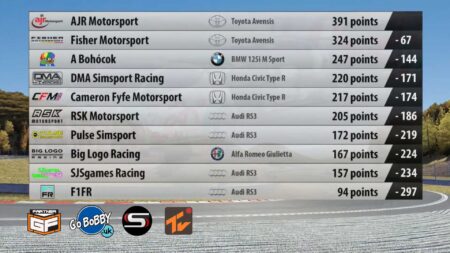 The VTCC returned to SimSport Racing International for the penultimate round of Season 4, held at the twisty and technical Okayama circuit. Previously, this series had it’s Pro and Pro-Am races held on separate streams, however sadly they have had some people withdraw from both divisions, however, this gave the VTCC a chance to show how the Pro-Am best stack up against the top of the Pro side by combining both divisions into a single race (points still being counted towards their respective championships). The top of the tree for Pro has been closely fought all season long by Englands Matt Dorrington and Hungary’s Adam Dobozy, separated by a single point with just 2 rounds to go, however, both were absent for round 5, giving 3rd place Roy Grassie a prime opportunity to claw back some points. Grassie has been fending off the advances of Jonny Seville and Reegan Mitchell (both regulars in the SSRI ACC GT3 league), but Mitchell was also missing from the nights racing, however, Grassie did not have an easy run at the top step of the podium. As for the Pro-Am side, they too had their top spots separated by a single point, Americas Trev Hummer fending off Slovakias Martin Durgala, with Englands Mark Holmes in a close 3rd, just 6 points adrift.

So the stage was set for some new names to take top honours for both the Pro and Pro-Am divisions, and qualifying for race 1 turned up some unexpected results, with the front row belonging to Pulse Simsports Myles Dixon and Jonny Seville, with Hummer and Durgala, Holmes and Grassie occupying 6th to 9th, in that order. Angus Martin started 3rd to make an Audi 1,2,3, but the fast-starting Tom O’Farrell in the BMW was always going to be a threat into turn 1 for the first lap, however, the Pulse boys closed the door and denied O’Farrell a run into the lead, but in doing so, Dixon lost the lead to teammate Seville, with Martin in the dayglo yellow Audi in the mixture. An amazing start from Holmes saw him climb to 5th early on, with Pro-Am leader Hummer having a game crash on the line. He was able to rejoin the race but stayed a lap behind the field for the rest of the race. The fighting was fierce throughout not just the first race, but the entire race saw plenty of door banging and elbows out racing, just as we love to see in touring car racing. The end of lap 1 saw Seville building a lead over Martin, who had usurped Dixon for 2nd, and Holmes up to 4th ahead of O’Farrell, and Grassie had fallen to 11th.

As the field settled into their rhythm, Dixon was constantly nailed to Martin for 2nd, which allowed Seville to continue to build his lead. The fast-starting O’Farrell badly out-braked himself whilst chasing Holmes for 4th coming into Attwood curve, which ended up with the BMW bouncing off the door of the Audi and facing the wrong way, dropping him to 11th. The “Milka boy” as Durgala was nick-named for having the distinctive purple colour on his Alfa managed to claim 4th from Holmes at the beginning of lap 5, and this fight now included Aran Large in his Audi, however, Durgala and Holmes came together at the Attwood curve, which allowed Holmes to regain 4th, and plenty of light flashing from Durgala showed what he thought of the incident. 2nd went the way of Dixon before the lap was complete, and Large managed to wrestle 4th from Holmes at the start of the following lap. Durgala was clearly aggrieved by the contact with Holmes, and the light flashing continued. 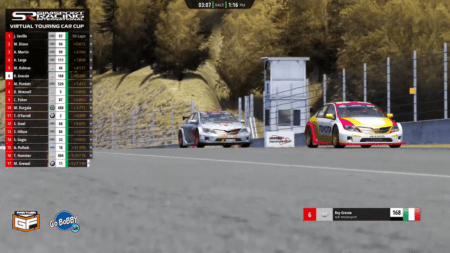 As Large, Holmes & Durgala continued their fight, David Wressle brought his Honda into the fight, along with Grassie and Mark Pimlott, making the conga line for 4th now 6 cars long. Large capitalised on the change to run away from the battle, as Dixon did over Maritin for 2nd. O’Farrells difficulties continued, as on lap 10, the BMW bounced off the Honda of Wressell and ended up facing the wrong way again. Durgala had the chance to challenge Holmes for 5th position going into the 1st turn, but alas the lake braking move he tried on the inside line didn’t work as planned, and saw the Alfa in the gravel trap and dropped him to 10th. With 2 laps to go, Dixon had managed to catch Seville and clearly had the pace over his race leading teammate, but he opted to stay in the rear gunner position to allow Seville to maximise his championship points gain. Seville, Dixon and Martin took the podium spots, Grassie managed to recover to 5th in the end following his qualifying difficulties.

The grid for race 2 is made from the results of race 1, so again the Pulse pair on the front row looking to pick up where they left off, and that’s precisely what they did. Each car has a success ballast added depending on their finishing position from race 1, the winner gaining 60KG, 2nd gaining 55KG and so on. Dixon did a sterling job in defending his teammate and holding the field behind him, Durgala and O’Farrell were side-by-side for almost half the 1st lap, and this time Pro-Am leader Hummer managed to start the race, albeit from 16th position, and was 11th by the end of lap 1. Holmes ended up back in 16th by this point, and the rhythms were then established, with the exception that Seville wasn’t able to build as big a lead as he would have liked, with Dixon staying in touching distance. As the race progressed, O’Farrell and Grassie kept each other company for quite some time, Hummer continued to pick off car after car in his recovery drive, Martin was determined to split the Pulse Simsport Audis, but Dixon was having none of it and continued to hold the AMR Audi at bay. Wressell sadly had force feedback failure and found the pit wall rather harder than he would have liked, which dramatically ended his race.

Halfway through race 2 saw Seville with a lead of just shy of 2 seconds, and Dixon holding off what must have felt like the entire world, 2nd to 6th being very interested in climbing up the ladder, but of course, with the varying levels of ballast, this gave O’Farrell an advantage over the Audis he was surrounded by, as his car was considerably lighter following multiple spins in race 1 seeing his finishing position somewhat diminished. Lap 9 saw O’Farrells BMW force his way through on Martin for 3rd coming through the long left-hander of Williams, however, it was not to last, as, by the time they got around to Piper, the BMW was on the grass, and had a spin again into Redman corner, dropping the BMW to 8th place. Towards the close of the race, Grassie and Large were crossing swords for 4th, Grassie managing to get his Honda ahead of Larges Audi, Durgala had a great ringside seat for the fight ahead, but Hummer’s charge with a lighter car managed to catch the back of the pack. Suddenly Durgala had his main championship rival to defend against. As the flag fell, the top 3 had the same occupants from race 1, Hummer was less than a tenth of a second behind Durgala over the line to finish another fantastic race.

Race 3 has the top 8 finishers from race 2 reversed, however, the pole position spot is chosen randomly from those top 8, and it was the BMW of O’Farrell that was the benefactor of the draw. Alongside him as Hummer, with the Pulse Simsport cars starting 7th and 8th. With the incredible start that the BMW is famous for, O’Farrell fully utilised this start advantage and with the nature of reverse grids, the faster cars (albeit heavy with ballast) were trying to fight their way past some of the slightly slower cars ahead. The fighting in the top half of the field was fierce for lap after lap, side by sides at almost every turn, but disaster struck Durgala yet again as he was the outside of a 3 wide going into the hairpin on lap 3 which sent the Milka coloured Alfa into the dust again, dropping him to 9th. Martin managed to remain ahead of the Pulse pair for half the race, Dixon always maintaining the pressure on Martin and Seville right behind his teammate. The top 3 of O’Farrell, Grassie and Large, had managed to escape the melee behind them, Hummer was in a very tricky position by lap 8 as he was leading the Pro-Am division, with several Pro racers right behind. Strictly speaking, Hummer was perfectly allowed to fight those of the Pro drivers, but he opted to not interfere with the Pro battle and focus on remaining ahead of Durgala. Martin and Dixon traded a lot of each other paint with numerous side by side manoeuvres starting at turn 1, and ending half a lap later, with Seville enjoying a great seat for the action ahead. As the flag was readied to fall, the battle for 2nd had erupted between Grassie and Large, as the 4th place fight continued to rage on, but on the penultimate lap, Dixon, at last, managed to claim 4th from Martin, which remained until the race ended. O’Farrell didn’t see much action, but a deserved win nonetheless, Grassie managed to fend off Large for 2nd, and a wonderful night racing for SSRI and the VTCC was concluded. The season concludes at Brands Hatch, where the action is anticipated to be just as incredible. 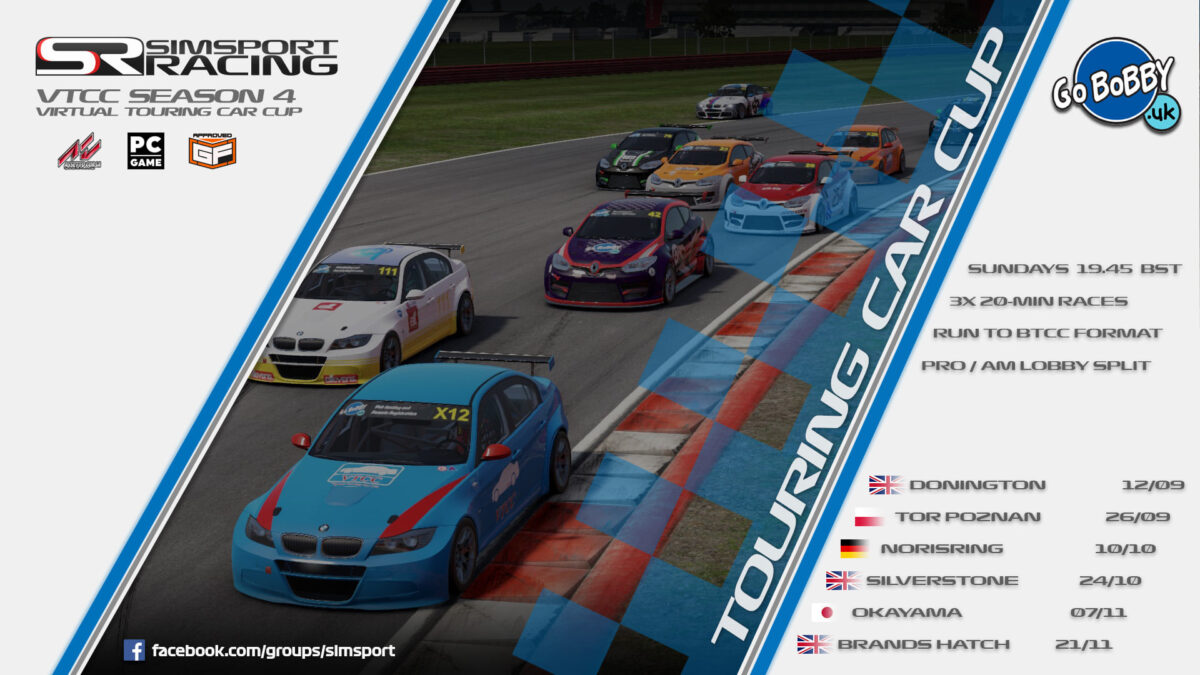 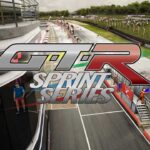 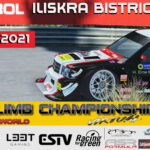