Last month, I spoke to several people about the time and dedication it takes to run a successful league, but one individual I was very keen to talk to was Luke “Actrollvision” Crane about his rise from racer to professional DTM commentator.

He graciously gave me some time during his hectic schedule for a glimpse into the world of the Actrollvision himself.

Where did the journey begin?

Fond memories of Project CARS 1 BMW Z4 at the Nürburgring GP circuit with a group of eight or nine friends, regularly racing each week with various GT3 cars and tracks and wondering “maybe we could race for points?”. I wasn’t aware of a league racing scene, so initially made Actrollvision Online Racing. After a few months, I realised that my AOR clashed with Apex Online Racing, so after a chat with Dan Hawkins, AOR’s owner, I rebranded to Actrollvision Community Racing.

ACR was born from a love of racing, and once I had a deal with Thrustmaster as a result of my streams, I got a steering wheel so I could become better at racing. In Project CARS 2, I was competing in the ESL finals every month, attending LAN events as a driver, but I soon realised that due to the lack of prize funds for drivers at the time, I could monetise my broadcast streams more successfully, so I decided to go for the commentary box. From a regular 15 to 20 viewers, ACR grew into the multiple-tier racing animal it is today.

To continue ACR’s growth, it takes a lot of hours and dedication, but it gave me the springboard I needed to make commentary and show hosting my career. I did the ESL broadcasts for a whole year with no payment, in order to get my foot in the door. This eventually led to Slightly Mad Studios themselves recommending me to do the grand finals in Germany in 2017, which was my first time abroad. The money I was paid from that got me a PC, which meant I could extend ACR from Playstation to PC.

I am the face and front of ACR, I do a lot of the day to day administration of the leagues, making sure drivers are signed up and where they need to be ons race day, I do a lot of the graphics work that is seen on the stream, the points calculations and championship standings, all the server hosting and migrating during the broadcasts. But without two people in particular, Shane Smith and Bart Ramakers, they built a website for me to be able to do the broadcasts the way I do, without which the broadcasts wouldn’t be possible the way I do them.

I used to do all the live championship updates via a google doc and displayed on OBS, but what they have built for me means that I can more focus on the commentary side, and there are very few league racing broadcasts that have the live standings immediately after a race available on stream, and things like that. This allows me to tell a story, not just for the top racers, but the one in P25 in the championship who’s had a great race. Also, I have moderators in the discord, a league council that does the stewarding, ACR wouldn’t be possible to run without the staff

How do you handle the toxicity that either gets thrown at you and ACR staff & drivers?

We have a set of rules, and you must abide by those rules if you want to compete in ACR, simple as that. Some have said that I rule with an iron fist, which isn’t what I intend but I enforce the rules so that there is a clear understanding for everyone in the community. If you miss more than one race in a season, you’re out of that season, unless of course, you have a valid reason for missing out that season, things happen in life. But the rules are there to get rid of those that can’t be bothered, and the amount of toxicity I get for enforcing those rules that everyone agrees to before taking part is almost embarrassing.

I’ve had comments said about me personally, my children, and my family, it can get horrendous. We don’t charge any money for drivers to take part, ACR gets its funding from donations and subscriptions, which is how I make a living, that’s never been a secret. I am very grateful to be able to do what I love as a result of this, but no one is forced to take part in ACR. The vast majority of the community are amazing supporters, but you always get one or two that think that they are exempt from the rules.

These are the ones that will go to any Facebook or Reddit page they can and write things like “Don’t race here, they did this to me”, and some people won’t look past that, and make judgments solely based on that. No one has been removed from ACR for no reason, it takes time to remove someone from a league, why would you spend time doing that without any justification? ACR doesn’t work like that, and wouldn’t be the size it is now if we did work like that.

You have to have a thick skin, but the toxicity used to affect me a lot. It still does on occasion, if I’m caught on an off-day. I’m fortunate these days in that ACR is roughly 50% of my work life, and the other 50% is more career-based jobs, such as commentary for VCO and DTM, I’ve worked with Logitech and McLaren, so I’m not as financially dependant on ACR these days. But when you run a league, it often can be your entire focus and you worry about people trying to burn down what you’ve worked so hard to build because they have nothing better to do.

What’s been your proudest achievement so far?

Working for DTM. I followed DTM for years and used to follow BTCC in the 90s, and now that my friend Dan Cammish is racing in the BTCC, I am more interested in the BTCC again, so touring cars is a passion. DTM is one of the biggest racing brands in the world, so to have the chance to work for them is mindblowing, I didn’t realise just how big an opportunity this was and the support I would get until I was a part of the championship. Whilst I was talking to the drivers trackside, I would have people recognise my voice, and even ask for autographs, which was completely alien to me. I also got to work with one of my idols, Dario Franchitti, who I am still in contact with.

As far as esports achievements, Project CARS 1 will always have a soft spot in my heart because that’s where it all began, and the people at SMS studios were wonderful to work with. My biggest esports-related achievement would be working in Las Vegas with Logitech and McLaren in 2019 at the Poker Stars Studios, the whole event was really special. I was a fundamental part of building and managing the WSeries Esports championship, working with David Coulthard, Billy Monger, and Leigh Mckenzie.

How difficult is it to maintain the work and family balance?

It was very tough when I had a full-time job as well as trying to build ACR into a monetizable entity to a point where it could take over as my full-time job, and this was also alongside other real-life motorsport commitments. It’s especially tough when you have young children, there are times when I can have an amazing broadcast, but I won’t be able to celebrate that with anyone around me.

I can have loads of viewers in a stream, and yet it can feel like the loneliest job in the world. I know that my partner understands what I do and is very supportive of my job, but the perception of “it’s just a game” is often difficult to look past, for those that don’t understand Esports. It’s one of the most difficult things to do, to educate those that don’t see esports beyond the “you’re just gaming” label.

What are your plans for the future?

Continue doing what I’m doing, take every opportunity that comes to me and see where the road takes me. One bit of advice I would give everyone looking to get into this world as a career is “know your worth,” and understand how much you should be charging organisations for your services, there are those that will take full advantage of you if you undercharge.

I want to be able to travel to as many places as possible, I will be going to Imola for the first time this year. Never take things for granted, things can disappear in the blink of an eye.

What is the future plan for your esports outfit Team Woooo?

More of the same, it’s something we do for fun. We have Nade, who is esports level fast, Dan Cammish who is coming out of his shell more and more and loves racing with us, X-Wolf who does the background stuff, Shane who came to us a little later and also built the website, TropperMitt who lives in New Zealand, Matt Malone who is a big iRacing streamer, and me.

There aren’t any particular plans, we aren’t looking to take over the world, we want to have fun and it gives me a chance to get behind the wheel, we do it for entertainment.

Thank you Luke for your time, and we wish you continued success in your career and for ACR.

I used to do all the live championship updates via a google doc and displayed on OBS, but what they have built for me means that I can more focus on the commentary side, and there are very few league racing broadcasts that have the live standings immediately after a race available on stream, and things like that. Aimlab Ranking 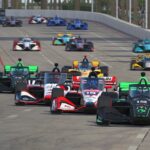 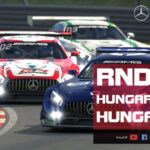