Roy de Munick of Deuces Motorsports Club and Roland Szucs of DEAC Hackers have set the pace during Open Practice One at Le Mans. Despite the fact they’re in LMP2 cars amongst an array of DPI talent, they managed to match each other and finish the session 1-2 with a 3:24.9. The leaders of DPI were close behind though, as Rookie Monsters were showing some promise on their return.

Early on, there was a lot of LMP2 activity. Deuces Motorsports Club had a notable presence throughout the entire session, with Roy de Munick setting the fastest time almost immediately, Robert Paun not far behind through the mid part of the session, and Joao Barbosa flexing his muscles towards the end, just two tenths away from his teammates.

The #51 WOSR iZone Performance Porsche also had a strong early presence, with Borja Milan setting the pace. But it was Jose Berenguer who would quickly overhaul his teammate in the first hour and, despite a late charge from Mattia Crupi, would hold on to have the best time of the session. The signs for Musto were decent, with the aforementioned Crupi only two tenths off his championship rivals. It’s an excellent start for spectators around the world, as the GTE protagonists are very well matched so far.

Most of the important GT3 action came at the very start, with the best time coming from Donat Diessner of MUGEN Sim racing in the opening minutes. It was a bad start to the weekend for Unison Racing however, as both Alexander Zakirov and Nikolay Bezrukov seemed to struggle to get to grips with the Aston Martin, and eventually ended their practice session early. They were 2.3 seconds off the pace by the end, so there is plenty of work for them to do if they want to clinch the title this weekend.

In fact, both Glam Racing with Calum Wilson and Asetek SimSport were faster than the current championship leaders in practice. The latter were on their EEWC debut in the session, and despite showing promise having placed second quickest in GT3, they didn’t have things all their own way. An incident at Tetre Rouge that took off the rear wing of the sole Audi in the championship showed that Le Mans can bite back hard at any time.

In DPI, Team Rookie Monsters were making a return to the EEWC, as Taylor Lane was the strongest of their drivers, setting fast laptimes from start to finish. This wasdespite losing a left front wheel through Arnage on an attempt which he says could have been nearly a second faster than his personal best.

The #666 sister car led by Bradley Sellars, were close behind too, but most importantly both quicker than Satellite Racing’s Nello Pastorino. The three cars were separated by just over half a second, so there’s real promise for a classic EEWC fight at the front of the field this weekend. 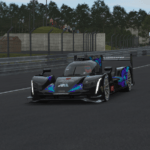