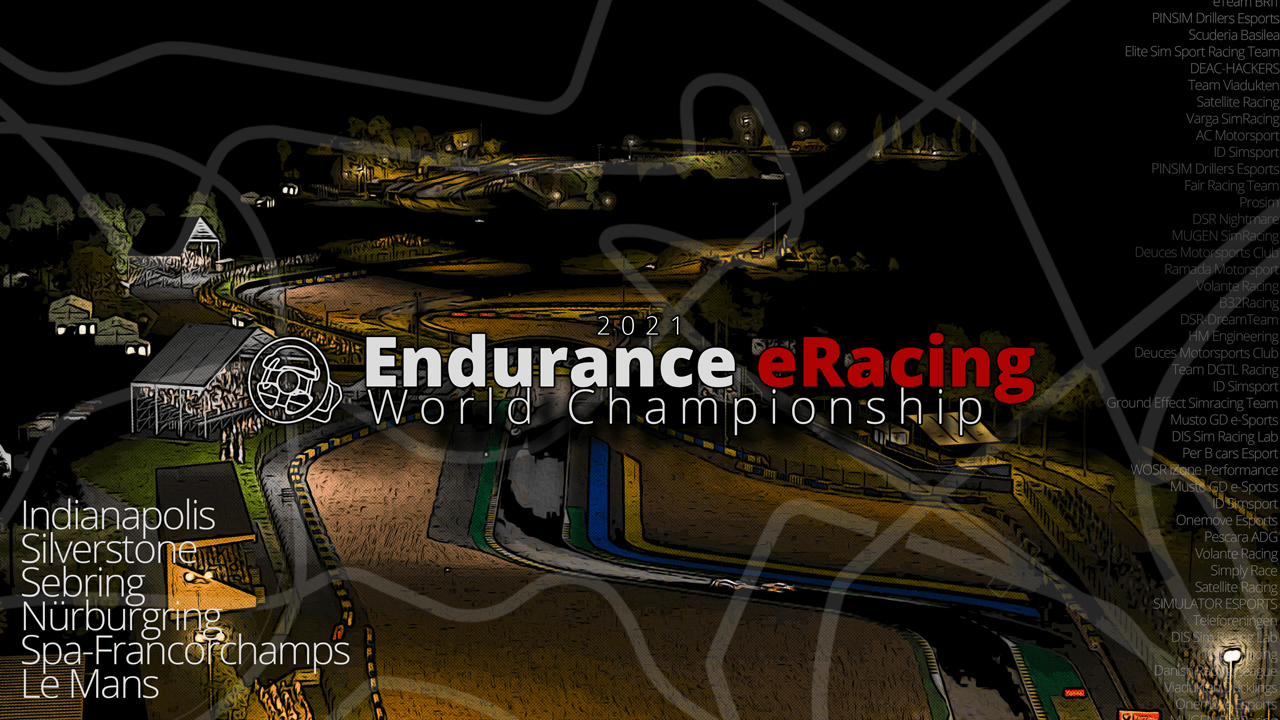 We are less than a fortnight away from the start of a brand new year of EEWC and let’s face it, a lot of us have forgotten all about last year championship, so we thought it would be a good idea to give everyone a ‘brief’ recap of both the season and its finale from Le Mans.

The fastest class of the EEWC replaced the McLaren Senna Hypercar class from the Nürburgring onwards, with three rounds left to go in in the season. Six DPi cars were present at Le Mans; The #64 & #65 cars of Satellite Racing, the #666 & #555 of Team Rookie Monsters, the #21 Axle Sports car and the #1 Team Viadukten car.

The #64 Satellite Racing car was once again unstoppable, with the likes of Martin Hemmingsen & James Dziuba securing another third comfortable win in a row. The #65 Satellite took a third successive second-place finish of the season, with Ryan Nash leading the team.

Axle Sports, owned by former F1 driver Alex Yoong, were arguably the favourites to take third, having shown solid pace in qualifying and during the fifth round of the season at Spa Francorchamps. However, they struggled to show consistency and finished seventh.

Team Rookie Monsters were able to secure third and fifth, with Team Adrenaline sandwiched in between. Viadukten struggled for pace and were only able to secure sixth place, which was enough to secure them third in the championship. 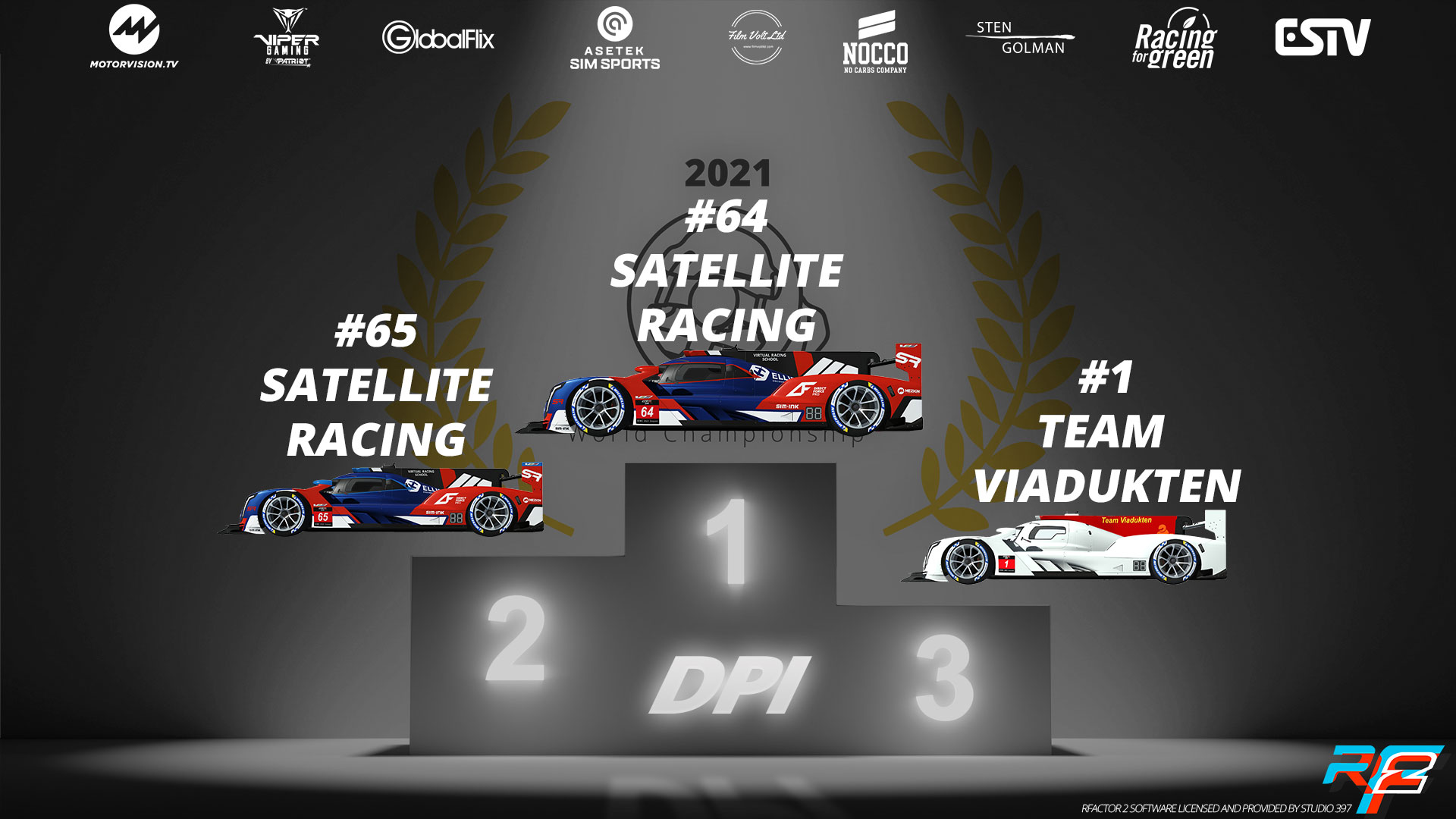 There was never any question as to whether Varga was the fastest car. However being absent at Spa Francorchamps and then absent again for the season finale in Le Mans, it had clearly left an uncertain atmosphere on how the championship would conclude. Varga Simracing had 101 points, with four teams behind them in striking distance; #15 Deuces Motorsport on 74 points, #22 MUGEN Simracing also on 74 points, #57 Ramada Motorsport on 62 points & #95 DEAC Hackers on 51 points. A total of 54 points were on offer due to the double points system in effect for Le Mans.

Qualifying saw the DEAC Hackers secure pole ahead of the #16 & #15 Deuces cars, making the possibility of the currently fifth highest-placed team winning the championship a very real possibility. Heading into the final few hours of the race, Martin Murguly in the DEAC Hackers was locked in a titanic dual with Dylan Klaver’s #16 Deuces Car for second.

DEAC Hackers attempting to take back second place in LMP2 from Deuces Motorsport Club. Probably not the last time we see this manoeuvre attempted by the #95.#lmp2 #eewc #eewc2021 #lemans #gtr24h pic.twitter.com/7y83zPRP3s

The race itself boiled down to the final few hours, when the heavens opened over the circuit.

The rain has arrived at the circuit and Teun Louer is threading the needle through the traffic of the slower classes on a wet track. This is for the overall lead …https://t.co/R4qrOZwKRk#dpi #lmp2 #eewc #eewc2021 #gtr24h #lemans pic.twitter.com/f7sPm6DWid

The current championship implications were that if the #15 Deuces car finished in the top two they would win the championship, whereas the #95 DEAC Hackers had to win the race to secure a top-two finish in the championship. The #15 Deuces car looked impervious and had a commanding lead – but nothing is ever as it seems at Le Mans. With less than 150 minutes remaining in the race, Teun Louer had a brake failure and crashed into the wall at over 100 mph. To make matters worse, this happened into turn five, with the Dutchman having to limp his LMP2 around the entire track to get back into the pits.

Now the battle between the #16 & #95 was not only the battle for the class win but also for the championship. The second Deuces car used every trick in the book in an attempt to keep a faster DEAC Hackers behind and secure the championship for the A-team, with the pair even making contact on the run towards the Porsche Curves.

INCREDIBLE SCENES HERE AT LEMANS.
With a brake failure for the #15 Deuces Motorsport car, it is all on the second team (#16 Deuces) to deny the DEAC Hackers a win and more importantly, the LMP2 Championship!
1 Hour Remains in the EEWC Season Finale.https://t.co/xkUF0taZJR pic.twitter.com/HPMXTzMczt

Entering the fihttp://https://twitter.com/GTR24h/status/1454775655393075200?s=20&t=QytXrLcTdlLKfCah8_riqQnal laps, the #16 Deuces continued to lead the race with an incredibly quick Martin Murguly running in second for DEAC Hackers. Murguly arguably would have caught back up to the Deuces car, had it not been for the barrage of mistakes being made in the slippery conditions. The #15 Deuces car was running in fourth, behind the #57 Ramada Motorsport car and was not even close to being able to overtake. This all meant Varga would secure their championship by a single point over the #15 Deuces team, unless the #16 Deuces slowed down and dropped themselves to fourth, thereby promoting the #15 Deuces to third and handing them the championship. Deuces decided against it, and whether they miscalculated the points and thought they had won the championship or decided to be gracious in defeat is a question we may never have the answer to. 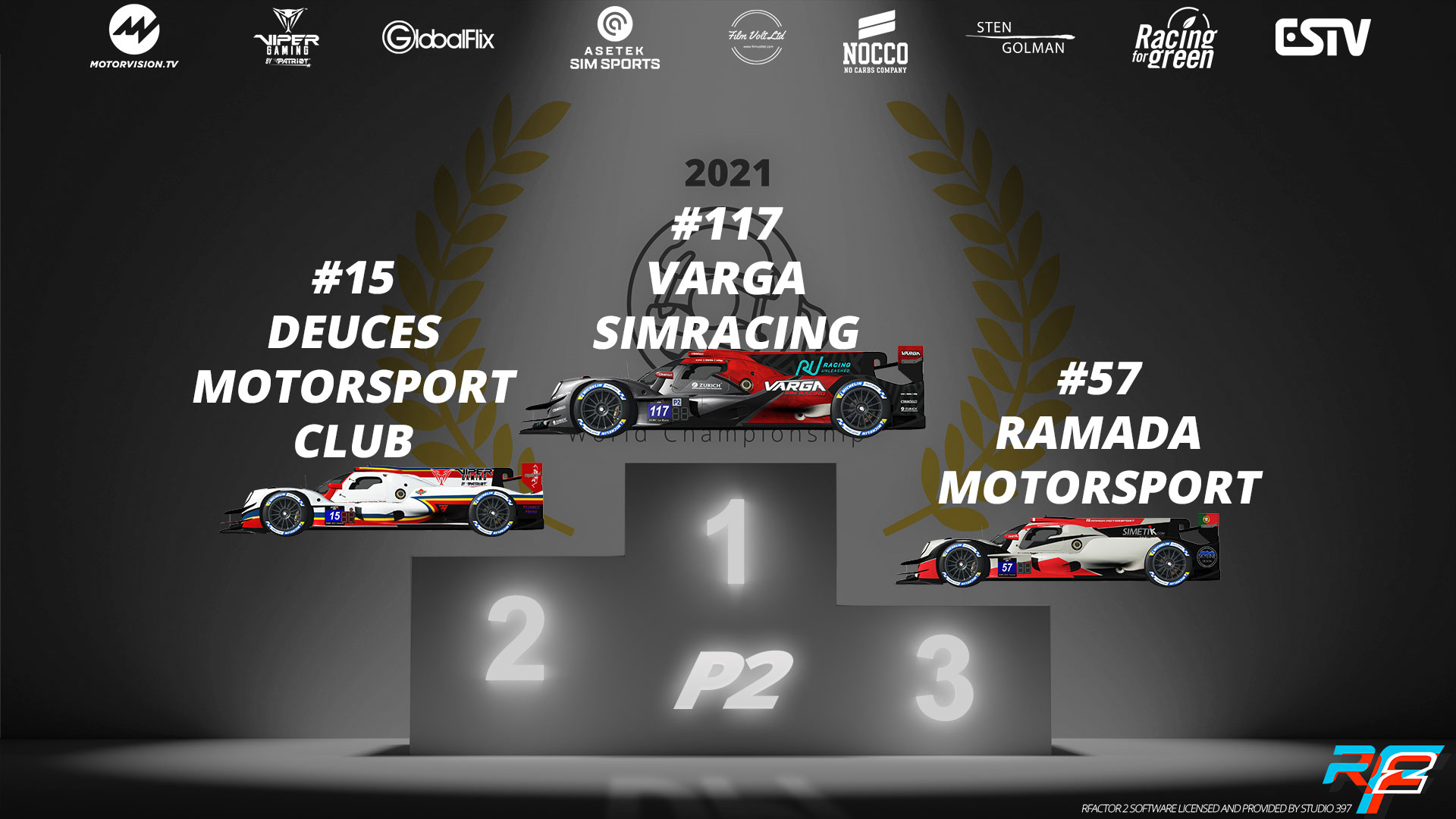 The GTE class was relatively close heading into the final round of the championship. The #53 Musto GD led the championship on 99 points, with #51 WOSR iZone Performance on 86 points. #45 DIS SimracingLab sat in third on 67 points, just ahead of the #54 Musto GD on 61 points. The #53 Musto had looked slightly faster than WOSR over the season, but had suffered some issues in the season opener at Indianapolis and at Sebring, struggled with the BMW’s lack of power to cut through traffic vs the Porsches.

One of the unfortunate tales of the season was the disappearance of HM Engineering, who won the season opener in USA, but did not show up to any of the future races. A shame as we were robbed of what could have been a thrilling three-way title fight.

In the race, it was a maiden & debut win for the #128 of Satellite Racing, led by Tom Kapusta, who were participating in their one and only race of the season. WOSR only qualified in fourth, with an average time well over a second slower than Musto over the two sessions. However, they picked up their pace in the race and took 2nd ahead of a DIS SimracingLab who secured their third podium of the season. Musto took fourth and fifth on the track, with the #53 ahead of the #54, enough the win the GTE championship by just three points. 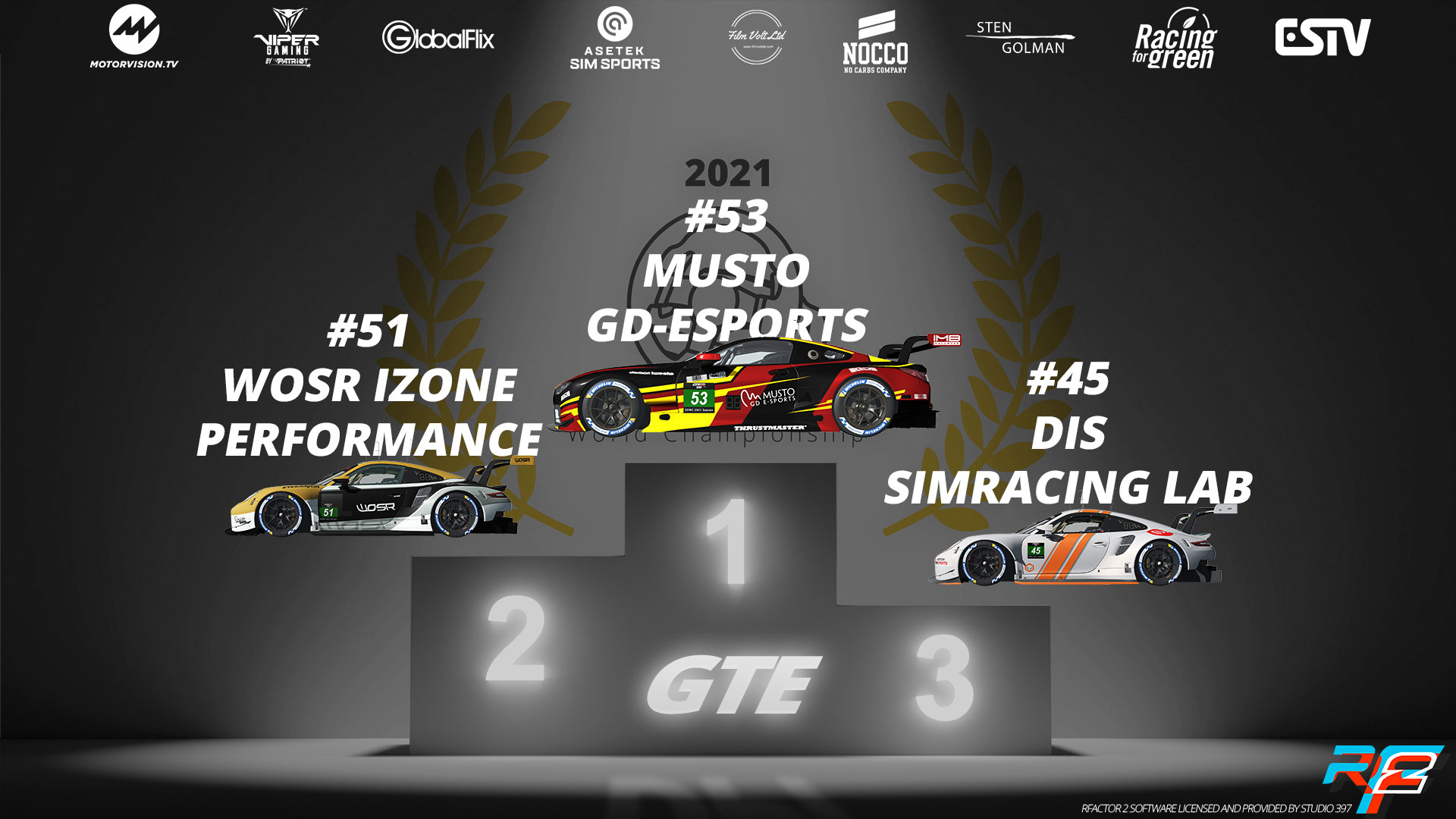 Unison Racing led the class on 115 points, 20 points clear of MUGEN Simracing on 95 points, with OneMove Esport in fourth on 78 points and Glamracing in fifth on 74 points. GlamRacing were the only team of the top four who were yet to win a race, having scored their best result of a second previously at Spa Francorchamps. MUGEN started the weekend off perfectly, securing pole ahead of their championship rivals Unison by just 2 tenths of a second.

Sadly though for MUGEN, their race was not as successful as their qualifying, only finishing third after issues on track prevented them from challenging for the win. That being said, it would not have affected the championship, as Unison racing took a comfortable fourth win of the season ahead of Glam Racing. OneMove Esport were not present for LeMans and it sadly resulted in them falling to fourth in the championship. The #46 DIS Simracing took fifth in the championship ahead of #13 Danish Racing League and the #188 Teleforeningen. 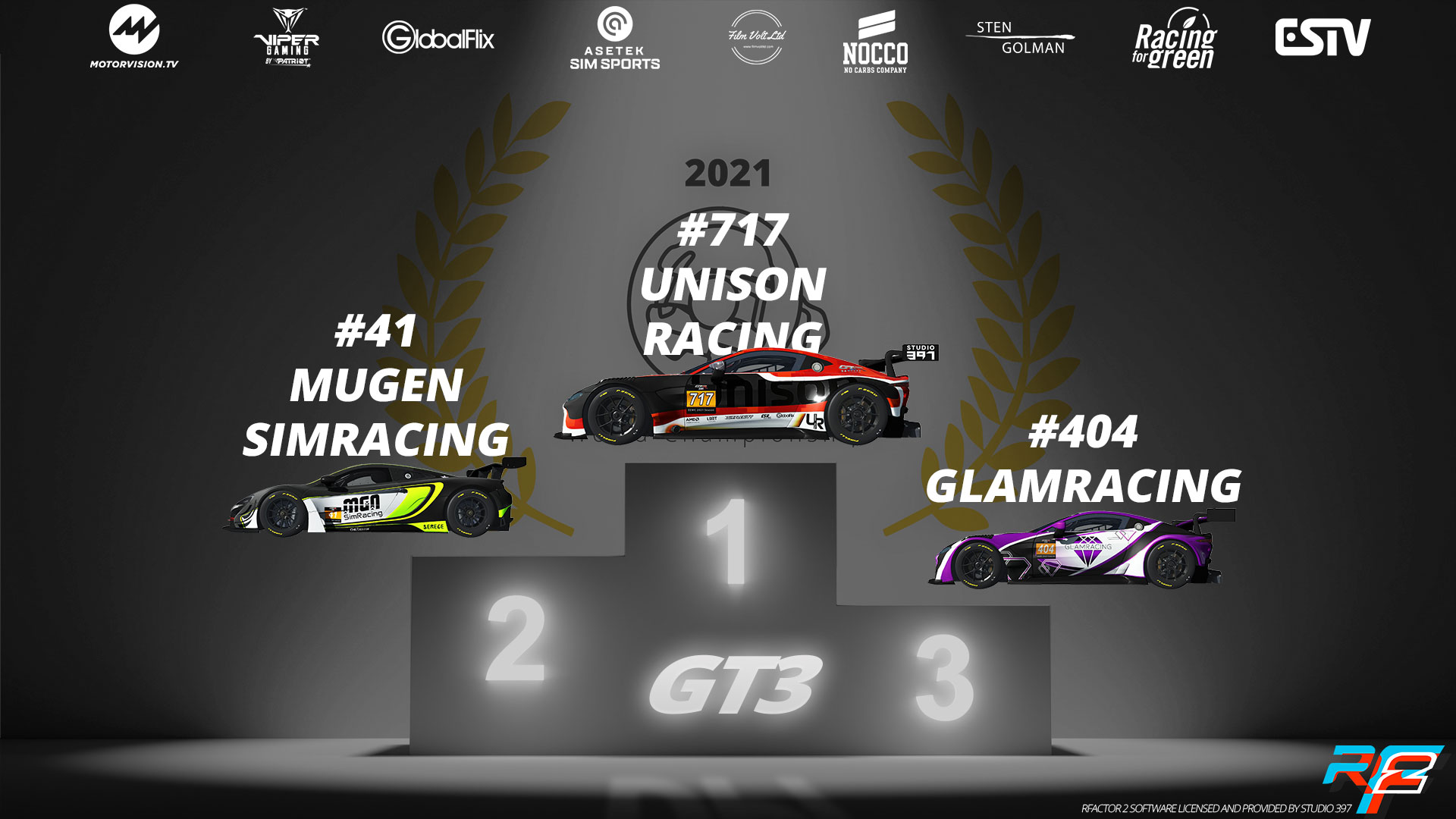 The first round of the 2022 GTR24H Endurance eRacing World Championship gets underway next Thursday (February 24th) at 20:00 CET, as the 12 Hours of Matsusaka gets going with Official Free Practice! 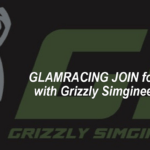 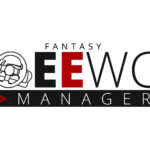