Ewan O’Leary and Yousuf Bin-Suhayl talk with Tiziano Brioni, driver of the #71 Musto GD E-sports car, that he shares with Pierluca Amato.

Transcription of the  video:

Ewan O’Leary: We’re going to speak to our race winner now the Musto driver Tiziano Brioni. Driver for the number 71 Musto GD Esports car, Fortunately to the only he didn’t have a whole great deal to do that during that race. You were often lapping on your own trying to keep the 57 EURONICS car at Bay. But often keeping to your own pace and staying within your own limits there. So it must have been a pretty satisfying stint and a satisfying win for the team. Yeah.

Tiziano Brioni: Well, it was a satisfying win. I only managed the work that Pierluca did. And the rest was so good. Basically, we have a really good fight with the 54 car. I was so disappointed with the crash because was a really good fight, but we touched it after turn one and after that, we lost the position and then I drove through for the other car. That’s it’s basically. We move we move forward. So motivating for the next race, even if it is a track that I don’t love so much but we try to do our best.

Ewan O’Leary: Now. I just want to talk a little bit in-depth about that incident down there at turn number one because it didn’t happen on our cameras unfortunately we managed to miss it somehow so just talk us through or really what happened between you guys because the EURONICS car did actually get a penalty a drive-through penalty for it. So what actually happened to the both of you.

Tiziano Brioni: Basically look Pierluca ran a little bit wide. So wide on the first turn and Jarschel go into the inside into the middle of turn one when Pierluca goes to take the line from the second turn Jarschel touch and there was a spin for Pierluca and Jarschel go away. So after that, he took a drive-through and we passed.

Yousuf Bin-Suhayl: Was it a similar kind of incident to Alex Albon and Hamilton Brazil last here?

Tiziano Brioni: Yeah more or less. Yes. But we were on to the inside and the other one was to the outside. So reverse positions. Basically.

Ewan O’Leary: I’m just down to one or a few words on the championship as well because that is closed in by another 10 points. Now you’ve got 10 points closer to Burst Esport now so the gaps 15 points, we’ve got five races to go. So, what are your thoughts heading into the next round about that?

Tiziano Brioni: Close the gap. We were so unlucky to the first races in the first race we missed the right car and we had the crashes in two of the four races. And all the other ones we did some mistakes that we could avoid. So now is our positive moment and we try to go forward with that. As I said Kyalami is a track that I don’t love so much because it’s such a hard track with particular turns and we try to do our best but competition is so tight and we try to make the same points of Burst Esports and maybe arrive at the last race in a good spot for fighting for the championship.

Ewan O’Leary: And good luck with the championship indeed. Heading into Kyalami. Thank you very much for talking to us to Tiziano and yeah, we’ll see you in a couple of weeks time at Kyalami. 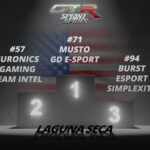 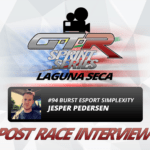