With so many current circuits lined by tarmac and astroturf, it is refreshing to see what is undoubtedly a blast from the past. And, as seen today, long history does not make something obsolete. In fact, quite the contrary!

The 3.9km (2.4 mile) loop from Paddock Hill to Clark Curve provides a challenge quite unlike anywhere else. Elevation change, technical corners, terrifyingly fast bends and no room for error. Combined with laptimes just over 80 seconds, the drivers would have to brave those turns time and time again. It’s one thing to put in a fast qualifying lap here – a whole other to do it for 2 hours. And speaking of qualifying, well, let’s see what happened there shall we?

Here’s an interesting question: What would you do when armed with a modern GT3 racer and told to go for it? Why, if you are one of these guys, you’d dutifully oblige.

Brands Hatch is not the easiest venue to pass in, being known as one of the more technical circuits in our calendar. As such, hitting your marks and getting near the front in qualifying was going to be all the more important. Clearly, the drivers had done their homework in that regard – none so better than Musto GD e-Sports!

With the Italian ace Pierluca Amato behind the wheel, they had managed to make that Porsche downright fly around this iconic circuit. None could match his pace, not even their sister team Musto GD Corse – but it wasn’t for the lack of trying. Alessio Pusceddu showed some promising pace but just couldn’t quite match the pole time. Still, no shame in 2nd place – especially if it meant an all-Musto, all-Porsche front row!

Behind them, Burst Esport SimPlexity brought their Lexus to a respectable third place. With drivers like that, no wonder! Two pilots with world championship series pedigree, it was the EEWC GTE champion Jesper Pedersen who had to perhaps surprisingly watch from the sidelines as Casper Henningsen took the qualifying honours. Championship leading Triple A Esports shared the second row with them, and it would certainly be interesting to see if their fortunes would continue. A duo of World’s Fastest Gamer Hany Alsabti and his teammate Alexandre Vromant were the favourites heading into Brands Hatch, with the latter doing the qualifying.

In row 3, Team Rookie Monsters and hometown hero Matt Beavis started alongside EURONICS Gaming Team Razer. Behind them, it was Simply Race Zansho in their #370 making Bentley Boys proud, while the two Buttler-Pal Motorsport teams and #23 Simply Race rounded out your top 10.

Well, that’s that done. We have our fastest drivers and they are placed in an order of pure, raw speed. Thanks for watch-

Oh, what do you mean it is not over?

Yes, despite being a hard track to make moves in, one still has to race. And one still has to hold on to the positions gained against those constantly looking to improve their own standing over the next two hours.

Scenes were painted from dreadful to terrible as people predicted all sorts of mayhem and melee heading into the first couple of corners. Meanwhile, viewers at home started getting their last fill of snacks in, prepared a couple of refreshing beverages, and got themselves in a nice, comfortable position. It was time to go racing!

At the front the two Musto GD teams continued from where they left off in qualifying. They were looking to put that proverbial boot on the throats of their opposition right from the get-go. However, it’s not like Burst, Triple A, or Rookie Monsters were planning to just roll over and turn blue. They were just too busy fighting among themselves to really pay attention!

Despite it being a long event, the name of the game was not patience. Drivers went side by side from the more traditional passing zones like Druids all the way into the downright suicidal ones like Sheene Curve. And yet – a testament to the skill of our competitors – there was little in the way of incidents, and outright wrecks were almost completely avoided. Few door mirrors and a hurt ego or two were the most significant casualties of the early scraps, as drivers shuffled time and time again.

In a pack like this, one mistake could mean four, five positions lost. A little too relaxed of a style means you are easy prey for the pack of wolves behind, while going too aggressive risks angering not only those around you but also the live stewards, who kept their eagle eyes glued to the proceedings. It was a pressure chamber, surely someone would soon crack…?

Starting from the sixth place, EURONICS Gaming Team Razer tried their best to get themselves in the front. At lap 30, their day was about to go a whole lot worse, though, as a rather ambitious attempt on the Team Rookie Monsters car left them facing a drive-through for their troubles.

But merely a massive fight for positions this event was not. There was an element of method to the madness, too, and one had to be as keen strategically as they were in the driving department. It was time for the crews to prepare for their one and hopefully only stop of the race. Who had managed to save a bit of fuel? Where was the gap in traffic, and what could be the most opportune of times to dive down the lane? The clicks of wheel guns and rushed footsteps echoed amidst the engines and squealing tyres as one team after another came in and did their mandatory service, starting drivers hurrying off their heated machines as they were subbed with a fresh pair of hands and eyes. Needless to say, they were unlikely to get a nice breather in – no, they were probably already prepared to take over from where their teammates left off.

Doing the best job in the pit sequence was undoubtedly Burst Esport SimPlexity. Henningsen picked exactly the right time to come in and as Jesper Pedersen jumped behind the wheel and put in some blistering laps, he soon found himself at the front of the pack with clear road ahead. We have seen Burst being absolutely divine over on Endurance eRacing World Championship, and looks like they were not planning to be classified as also-rans here either.

Triple A were chasing second in the trot, with Hany Alsabti putting the chase on the leading Lexus. Previous leaders Musto GD e-Sports were reduced to third place and Tiziano Brioni was starting to crack. His pace was simply not good enough, and little mistake here followed a mishap there. The gap ahead grew steadily, and by the time the drivers headed towards the final half an hour, the question was less if they could catch up and more if they could hold on! Mike Epps in the Simply Race Zansho Bentley was coming, and he was coming fast.

With such a short track and the amount of cars squeezed onto the space, it is obvious that blue flags and lapped cars would eventually come into the picture. Backmarkers generally did a good job in getting out of the way, though, so neither of the third place contenders were too badly affected. So, Epps was able to catch up thanks largely to his raw pace. Brioni could soon see the winged B looming in his mirrors. Spectators were primed for a great battle, but instead the Italian went wide at the penultimate corner – Stirlings – and promptly found himself out of the champagne places.

As for the other Musto GD entry? Well, the #98 held onto second place all the way up to the pit stops, but was relegated to fifth place for the second half of the race. There was little that Daniele Primavera could do, but they were still in a great points-scoring position. The qualifying pace is undoubtedly there, but the Musto boys would need to get their Porsche working over the race distance, too.

So, with less than ten minutes on the clock, the battles raged on. Crowd was cheering not only for the Astons, Bentleys, and Maccas, but also for the #52 Pulse SimSport entry. With two local lads driving their hearts out for a top-10, it was looking good. However, a miscalculation with the fuel reared its ugly head in the minutes of the race, and as a result Myles Dixon had no choice but to dive into the lane. They were able to resume, but a 15th place is unlikely to feel more than a participation award at that point.

Going back to front, there was another source of drama with just couple of laps remaining. Race control was investigating Hany Alsabti in the #762 Triple A Esports car, and if guilty, they would surely lose that second place to the charging Simply Race Zansho! Mike Epps was fast capturing the hearts of Britain. Sure, he had shown his pace behind the wheel of a real car before, yet in such a field there were few who expected Mike to be quite this impressive.

Nobody could catch Jesper Pedersen and the Burst eSport SimPlexity Lexus. They were mighty impressive in the second hour of the race and played the strategy game just right. The praise from both Ewan O’Leary and Aidan Millward in the commentary booth was well deserved.

Hany Alsabti brought the #762 Triple A home in second place, but with the threat of a penalty looming was looking a little unsure after the event. And as said, #370 Simply Race Zansho rounded out the podium. There were few that smiled brighter than Mike Epps, and no wonder! The Brit has a great future ahead of him, no doubt about that one.

Thanks to all our sponsors for making this championship possible, and massive credit to Peter Munkholm for handling the broadcast with his trademark expertise. Credit is also due for our live stewards Jon F. Turell, Paw Lindegaard, and Nick Newcombe. We’ll see you in two weeks at Zolder for what will hopefully be yet another fantastic race! 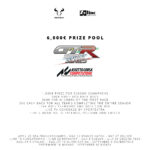