The nightmare on 12 hours of Monza carries on as the teams are being tested to the limits – We are now seeing the 62 Unison Racing in a DNF and 51 Ramada MotorSport out of the race so far due to sickness in the cockpit. The spell of Monza hasn’t threatened the teams well and on top of this, the Monza Weather situation is playing its tricks as Monza is now covered in Cloud with Dust rains and slowly building up around the track. Who will survive the Monza Monster as it races on the track for another 5+ hours and the teams have to endure the madness?

Earlier Incidents made the 62 car hit Prosim twice which served them a Drive-through and then a 30 second stop and go.  The Prosim team has though been the big surprise in the last couple of Hours managing to keep very experienced teams of 717 Unison Racing, 14 GSR team, and others behind – will the Prosim team have what it takes to reach the pole and overtake the extremely experienced 65 Satellite Racing team going Into the last couple of stints. There are plenty of hours left of the race to prove it can happen – literally anything can happen at Monza today – we only missing Thunderstorms and power outages to happen at the track during the night session. 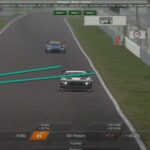 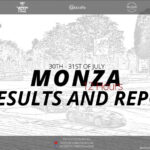 12 Hours of Monza Special – The Event and results
PREVIOUS